Just next to Simple’s Mountain Retreat in Plebeja you find a nice 3456m2 public place called The Mountain Greenhouse. The parcel is not listed in SL search, so only known to the travellers of the high Mountain Road and to the readers of this blog 😉

The description of the parcel says: “Hi and welcome at mountain greenhouse. I dreamed of living in a greenhouse so i decided to do so.” It is group owned by the Mountain Greenhouse group, founded by seventhwave. In his profile he describes his role as “I am just the good spirit of Mountain Greenhouse paying the bills and cleaning up the mess after every party”. 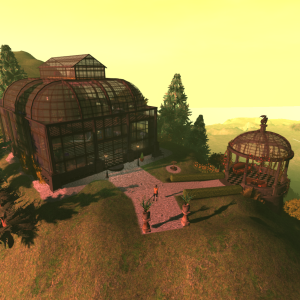 The building is very beautifully located on the ridge with a nice view over several sims (and to my Mountain Retreat). The greenhouse and the gazebo are made by Phoebe Avro, Owner of The House of Avro Gothic Furniture and Castle Furniture – “I build Gothic furniture, castle furnishings and Antique items”, Part owner of Club End of Days Gothic Club, one of the oldest Goth clubs in SL and Owner of The largest Christmas shop in sl – Christmas at The house of Avro (open 3 months a year). A very impressive list indeed 😉

The nicely animated furniture in the gazebo is made by Harrpo Marabana. 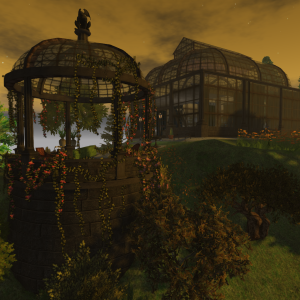 The Gargoyle on top of the gazebo is a “Bad Katz Mesh Gargoyle”, made by Katz Republic – Owner of Bad Katz Textures.

The greenhouse is fully furnished, you will find many places to take your selfie 😉 The furniture is a very carefully selected collection of pieces from Yelly Donut (yelena.istmal) – [noctis] and Akaesha Revnik – Akaesha Designs. The TV displaying visitors profile pictures is an old Freebie from the Golden Oriole made by the famous builder Oriolus Oliva.

The greenhouse itself is a nice piece of work: Despite the amount of transparent textures, all conflicts all carefully averted and the structures of the walls and the roof are making very nice shadowplays on the tiled floor. 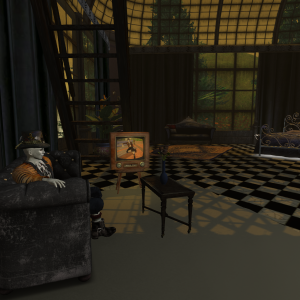 Upstairs a beautiful bath by Akaesha Revnik – Akaesha Designs is set up for the tired traveller to get the avatar clean and prosper again after touring the dusty (or muddy?) High Mountain Road. Additional furniture is again made by Yelly Donut (yelena.istmal) – [noctis].

The plants here and downstairs including the beautiful orchid behind the bathtub are made by Logan Bauer (“Hi!  I run Arctic Greenhouse and Logan’s Virtual Showroom, in the sim “Alternate Reality”).

There are still many of these small places worth visiting and enjoying to be found on the mainland. Generally more so along the roads and railways. The building of this network some years ago was in my opinion one of the greatest achievements of the Lindens (and the Moles!) in the history of SL. Now it still binds the regions together, despite the fact that many of the parcels in between are abandoned and empty.

The character of the mainland gets less and less suburban and more and more rural. But that in my eyes is a development not for the worse 😉

So Traveling will again saddle his horse and show you soon on this blog, what treasures still can be found on Mainland SL. And a big thumps up from and to all the connoisseurs: Greenlaning is groovy for real again 🙂

Be nice and have fun … 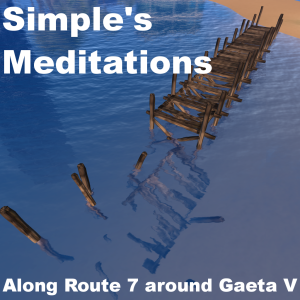 Volume 8 in the series collects the most beautiful and remarkable pictures from Traveling Albatros’ cirumnavigation of Gaeta V along Route 7 as described in this post.

The Route follows mostly the coastline and is even sometimes continued as waterway or canal. 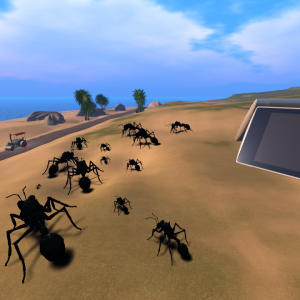 It is a very rewarding trip. I recommend to take your time, some of the creations of the residents you will pass en route are worth a second look 😉

As with all the other books in the series, the 28 stylish pictures are accompanied by some deep wise words 😉

All sales as always in favor of Simple’s Zoo of All Things @ Lythria.

I landed at (http://maps.secondlife.com/secondlife/Falmouth/170/254/26), directly in front of the entrance. The “Creepy Tree B, PYRI, EAR, OBJ” are made by Earthy Mole, the gate by Crazy Mole.

The Blood Fountain in front of the Hotel is created by Myopic Mole and Sylvan Mole. Most objects on the parcel are owned by Michael Linden. A lot of the Hotel building is made by Sylvan Mole, some additional stuff are from Naughty Mole and Smokey Mole. 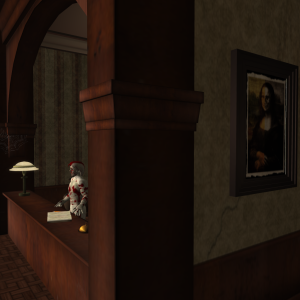 There are a lot of details to explore and enjoy. The “Male Zombie Standing” is made by Crazy Mole, the “Falmouth Pic & Frame – mona” by Sylvan Mole.

A beautiful Ballroom with Skeleton “Frank” by Crazy Mole and Piano and Drums by Sylvan Mole on stage.

Some rooms and the corridors are decorated. I did not found an official way upstairs around the broken lift, so I used the cam. There are enough sits available to get you on the different floors. Here are some examples of the scenes you will find there. 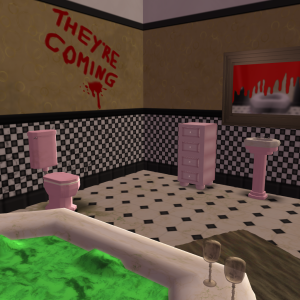 This Bathroom is made by Silent Mole, the mirror is animated.

The animated Coffin is another creation of Silent Mole, the “Candleabra scripted to blow out when near” is made by Sylvan Mole. 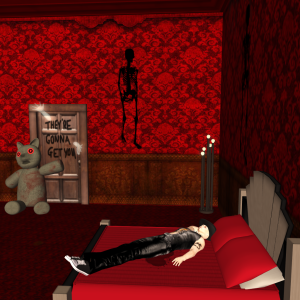 The “Art Deco Bed” is made by Silent Mole, but after the long time in this creepy Hotel, I needed some fresh air and a better place to recover 😉

And voilà, wandering just a short stretch from Falmouth into Bay City, I found this interesting park in Imagenario.

It is the “Molexandria Archeological Site” build by Guaca Mole and Naughty Mole. You find it listed also as point of interest on  http://wiki.secondlife.com/wiki/Linden_Department_of_Public_Works_Bay_City.

The Mole Ruins of Molexandria are made by Guaca Mole – a kind of prehistoric Linden Homes ?

The park offers a small Labyrinth, an Arena and this interesting exercise for three Avatars, also created by Guaca Mole. 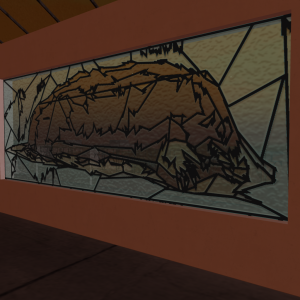 be nice and have fun 😉

“Just East of Ice Bay, the Sea of Fables is a sailors dream with many points of interest and stopping off areas” – that’s how this region of about 30 sims is described on http://wiki.secondlife.com/wiki/Sea_of_Fables . Have a look there for a nice map and the location of the rezz zones. Read how this amazing work of the Moles from the Linden Department of Public Works was announced by Michael Linden on 10-20-2010 on the LDPW Blog: http://community.secondlife.com/t5/DPW-Department-of-Public-Works/Sea-of-Fables/ba-p/669426 – and from a non-Linden point of view the birth of the Sea of Fables is described here:  http://sllou.blogspot.com/2010/06/holy-moley.html …

The region is not only a sailors dream, but also one of the most rewarding places to ride a balloon 😉 All the regions are Linden owned and the islands are very beautiful examples of the craftsmanship of the Moles. 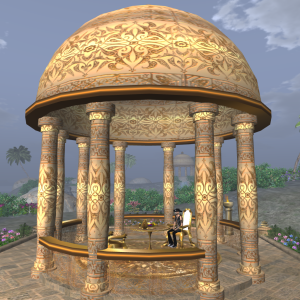 I did start at the rezz zone on Mirtoon Islands also called the “Isles of the Blessed” at (http://maps.secondlife.com/secondlife/Mirtoon/93/163/21) and visited all the scattered Isles on my tour. You will find here a selection of the pictures I took en route.

Walkways and buildings on the Isles of the Blessed, here a “Golden Gazebo and Platform”, are made by Naughty Mole, the “sho.DragonChair” by Opti Mole. 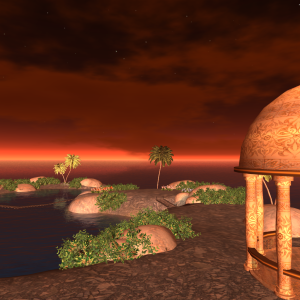 Nice walkways and bridges connect all the small Mirtoon islands to allow for a small tour with nice views on the sea.

Then I rode north to visit the historical “Teen Grid Transfer Station – This is where our youngest Residents come to celebrate their transition to the Main Grid. Celebrate the spirit of Second Life!” on Baffin Island. The building is made by Lordfly Digeridoo, different creators for furnitures and decorations. This is older than the work of the moles 😉

On neighboring “Bacchus Island”, the “Hercules with Club (FINAL)” and the “Serpent Tree: Ladon” as on top of the hill in the background the “Atlas with Globe (FINAL)” are made by Garden Mole.

Still on Bacchus Island, this “Statue of Atalanta” and the “Fruit Tree C – Golden Apples” – yes, they let golden apples fall and roll down the hill – are made by Silent Mole. 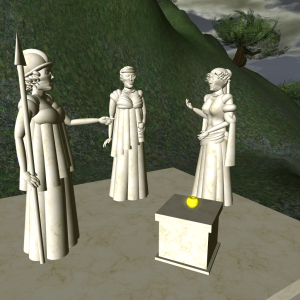 Around the hill, Athena, Hera and Aphrodite by Silent Mole are debating on the right to the golden apple.

Hera has her own small island: “Hera’s Island” by Silent Mole. 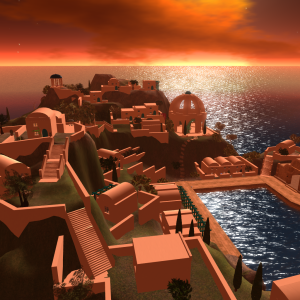 Next I cross to “Poseidon Island”, a wonderful harbour village in greek style by Mysti Mole. There are some very beautiful places scattered around the Island for the visitor to explore and enjoy. 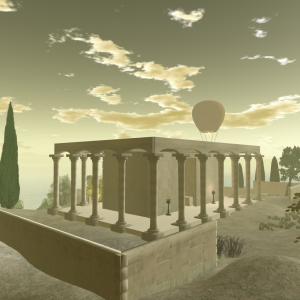 The building on “Joppa Island” is made by Bloomin Mole.

The same Bloomin Mole is the creator of the “Cave of the Gorgon” on “Gorgon Island”.

And the same Bloomin Mole is also the creator of the buildings on “Seriphos Island” with this “God Seated_SF_GOD_Bloomin_OB”.

Riding back to the West of the Sea, I passed “Hephaestus Isle” created by Hyper Mole.

Last of the landmarks en route was the vivid “Orwood Volcano” by Crazy Mole, a small brother of the Volcano of Ichelus I visited on my Balloon Ride here.

I also passed some really amazing privately owned residences around the coastline – so I’m sure I will return some time soon for another tour along the shores of the Sea of Fables.

Traveling Albatros is always ready for “Don’t be where you want to drive, drive where you want to be!” – the motto of Yevad Doobie’s Greenlaners group (find the work of this explorer of the mainland roads on http://greenlaners.com/ and http://protected-routes.com/). 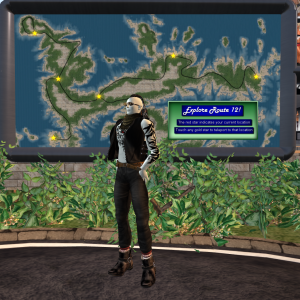 So standing at the rezz zone on Route 12A at (http://maps.secondlife.com/secondlife/Camorro/249/13/50) on Nautilus and realizing all the abandoned parcels for sale in the neighborhood, it came just natural to him to try a way south, but away from the Linden Route. About 10 regions south starts Route 13, so the intention was to look for a path there, using only linden owned land or parcels for sale.

Very handy for a tour like this comes the “Path_Map_v14” by Kimiko Dover, a small HUD device, which shows for a whole region the access settings of every parcel. With this attached, you can circumvent easy the banned properties. 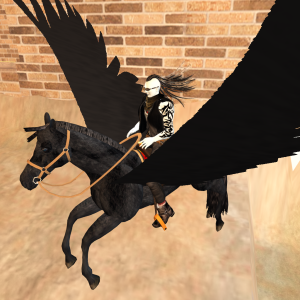 And as last resort, my horsey can grow himself some wings, and jump the obstacles 😉

But there was just once the need for that. This part of the mainland is a real mess in desperate need of some deep maintenance. There were even linden owned parcels of abandoned land with their old access restrictions still active …

Even the rare larger privately owned holdings were more or less derelict. I had to cross two Rentals on my way. On the first one, there were apparently vampire squatters active in the past.

The second one here looked not much more busy, some of these parcels were set to the Austria in SL group. 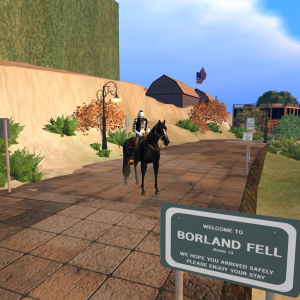 It really is not a good message about the economy of second life, that it was possible to take almost a straight path to the south to arrive at Route 13 at the rezz zone in Borland Fell at  (http://maps.secondlife.com/secondlife/Borland%20Fell/209/248/81), and that I never needed to teleport to the other side of a banned parcel …